A downloadable game for Windows

For this little game you only need the left and right mousebutton to play and navigate.

Maneuver the spaceship through the obstacles and enemies to rescue your friend. Of course you can also shoot the enemies. But you should watch your energy levels and collect enough energy orbs to make it to the goal.
This game is a slightly improved remake of a game I did about 12 years ago. I remade it to have all the games I ever did working on modern PCs.

I hope you have a little fun with it.

Why is there no options? No fullscreen mode, no sound options.... =(

Plus I can't play with only LMB and RMB.  The option to use keyboard controls would make this playable.

Phew... this game is potentially very good, but has some really weak points.

First off, I like the graphics, they are amazing. And the intro sequence is just awesome, I love it.

For the most negative part, the music is basically a no-go. I think it's some sort of a nice funny idea to play that song for a short moment, but having a popular song just play in a loop, - yeah. A no-go, since, as a player, it's just annoying. I played it with my computer sound muted since I really wanted to play it, but hated to be doomed to that one song.

I think I would have like the game more with health seperated from the energy system, for this reason: The energy being the health at the same time often results in situations of check-mate, where I can basically just kill my virtual self because I will run out of energy, no matter what I do. It dooms me as a player, which is just not good by design.

Finally, I think bigger bullets would have been a good idea because, despite the reaction / precision gameplay core: Especially the missiles 'wobble' in the air and with the two button input, it's almost impossible to reliably land a precise shot (by intention), which reduces player agency a lot and adds an unnecessary potion of luck to an otherwise nice quick-reaction game.

I made it till the yellow / brownish area where I then ran out of enery and crashed into one of the boxes.

Hope this feedback helps somewhat and I hope it's not too harsh! ;-)

Thanks for the feedback.

I might do a remake for this game in 2019 and will of course consider your suggestions. :) 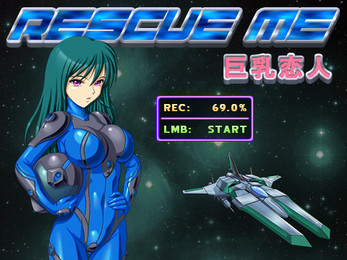 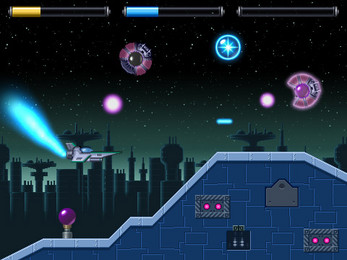 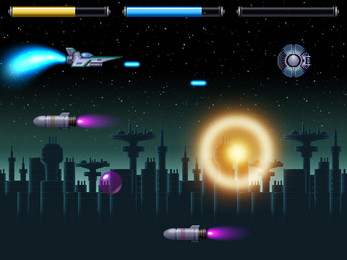 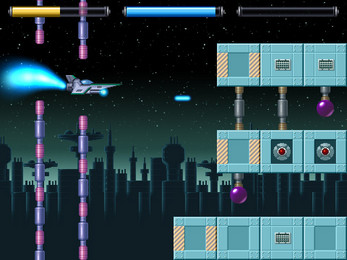